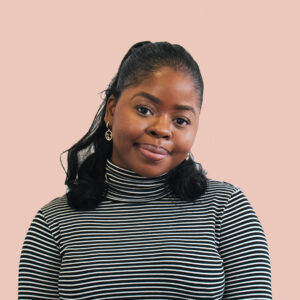 All right, today we’re going to talk about all things moissanite. A lot of people consider this stone to be the best thing that looks like a diamond that isn’t when it comes choosing an engagement ring or wedding bands.

We’re going to answer the burning question that people usually ask: Can you spot the difference between a moissanite and a diamond?

We’re going to go over:

Let’s get right into it. So, a moissanite, believe it or not, is a gemstone, and it mostly originated from outer space. 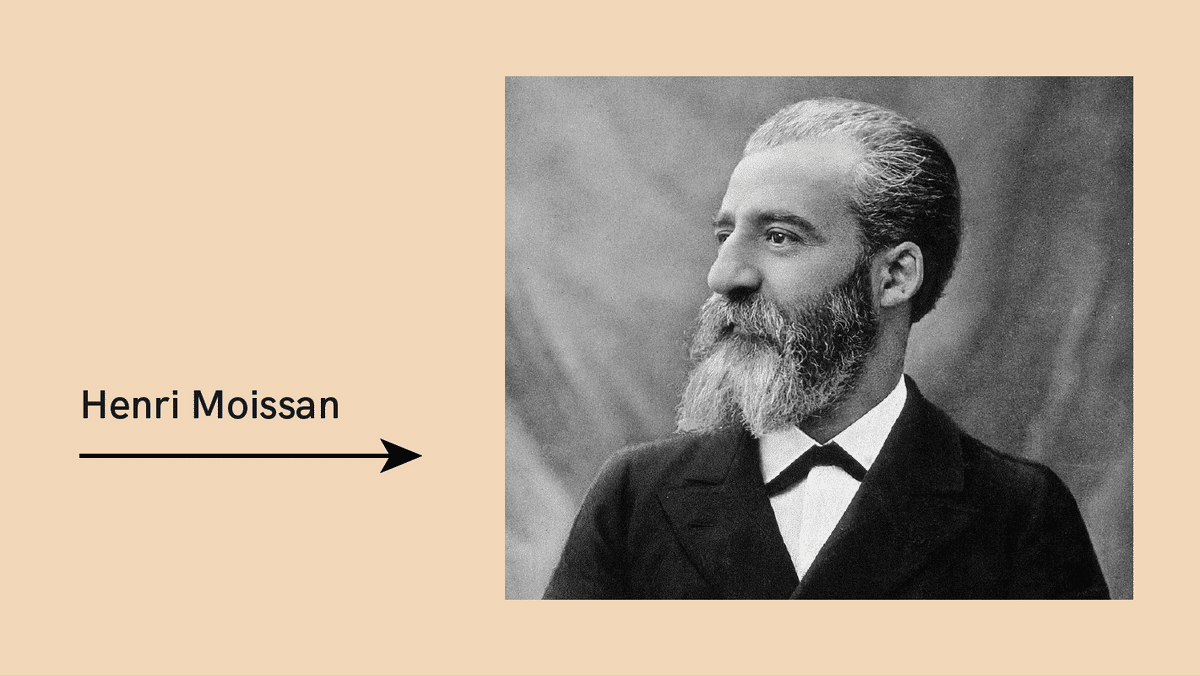 One of the most popular questions we get asked is can you see the difference between a moissanite and a diamond? The answer: it depends.

So, two main factors to look at are the shape and the source.

As far as shape is concerned, if you’re going to be comparing a round diamond to a round moissanite, that shape is probably where the difference is going to be the hardest to spot. 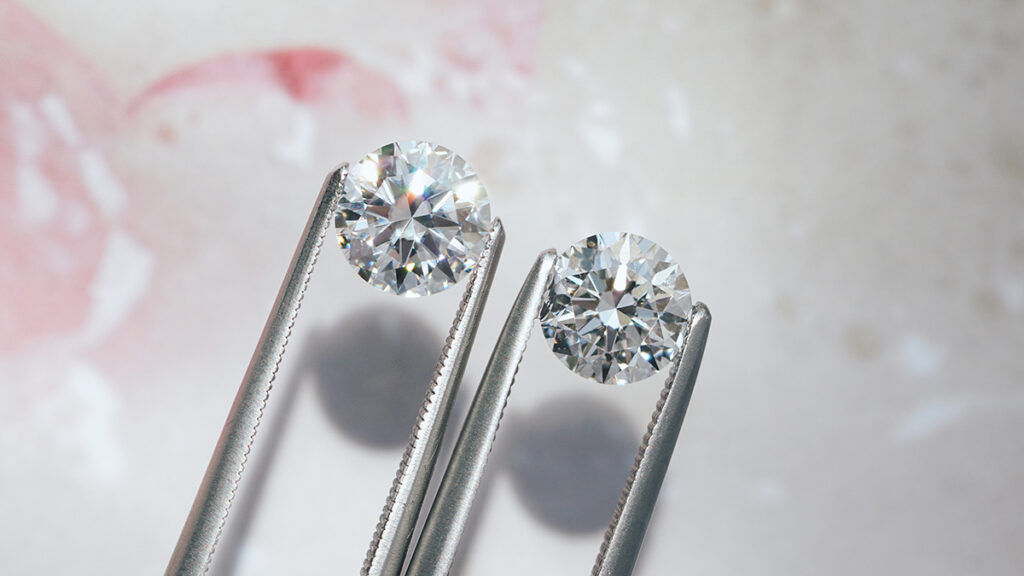 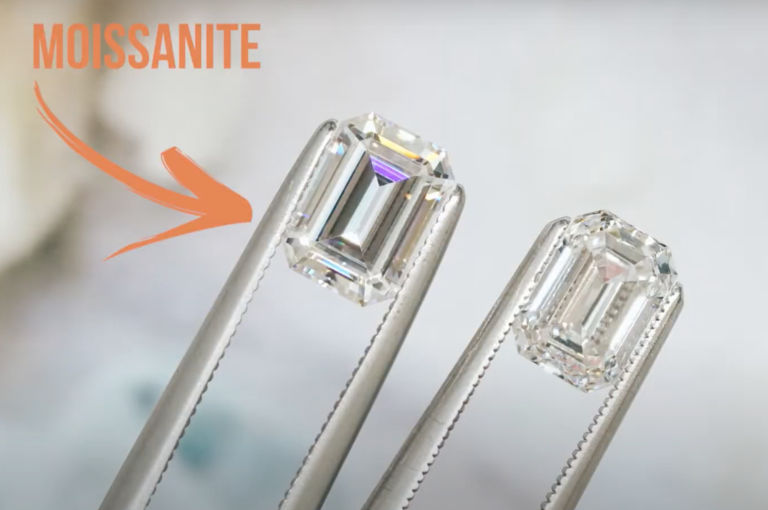 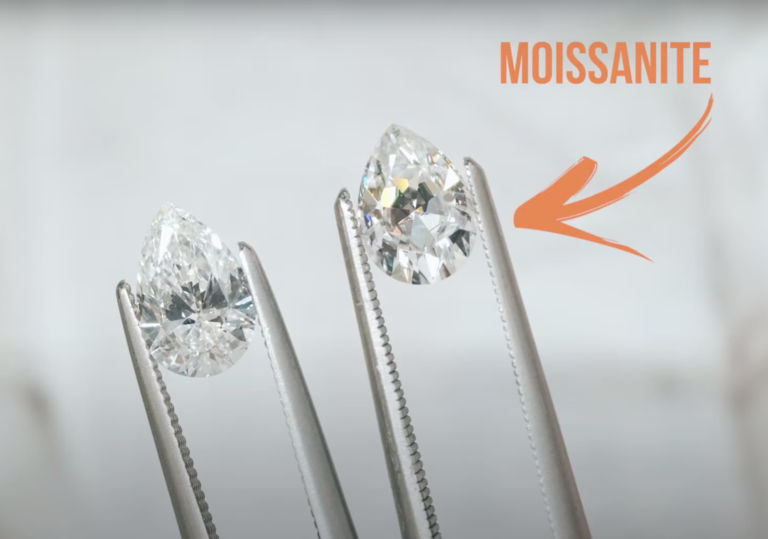 Moissanite is lab grown and depending on who grows it and how it’s grown, we’ve found that it actually also has a big impact on how much of a difference you can actually spot. In our experience, if we’re showing a client a round diamond and a round moissanite, side by side, a good third of the clients can’t actually see the difference. And for the other two thirds that do notice differences, they’re going to be able to tell differences, but they’re not going to be able to definitively say which one is a diamond and which is a moissanite. All that’s happening is that their brains are comparing and contrasting but they won’t know which one is which.

Let’s do an eye test. Take a look at these two stones. One of them is a moissanite and the other one is a diamond. Can you tell which one is which?

The left is a moissanite, and as you can see, it has more of a rainbow spectrum- when it sparkles, you can see the red, blue, green all reflecting out of the stone while being a white palette stone. It’s quite unique and magical.

We have a blog article on why carat is the number one thing people get wrong, I’ll link that here. But when it comes to moissanite, it honestly is pretty useless; what we would want you to look at is measurements.

If you’re looking at a round stone, just look at the diameter, e.g. this is an 8mm stone.

For an oval it would be the length to width ratio so an 8×6 mm oval. 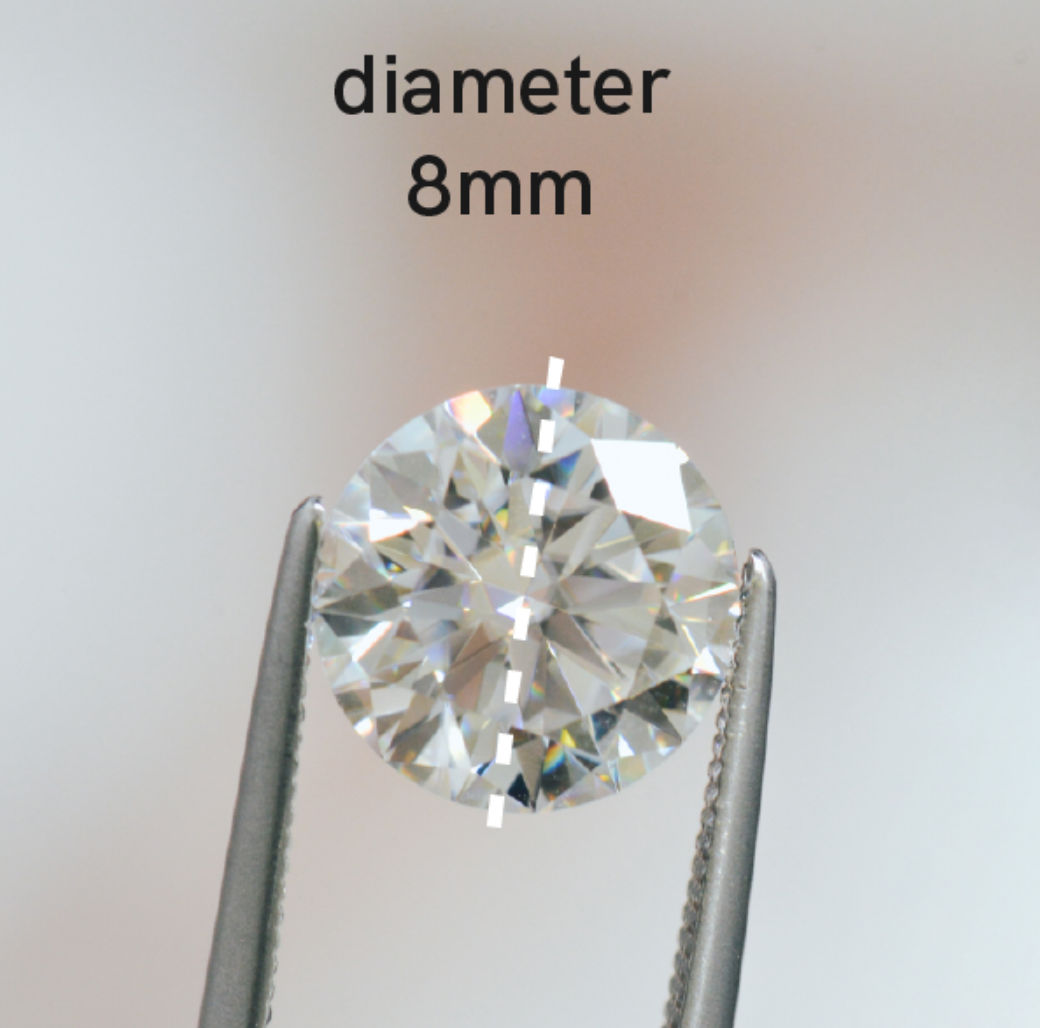 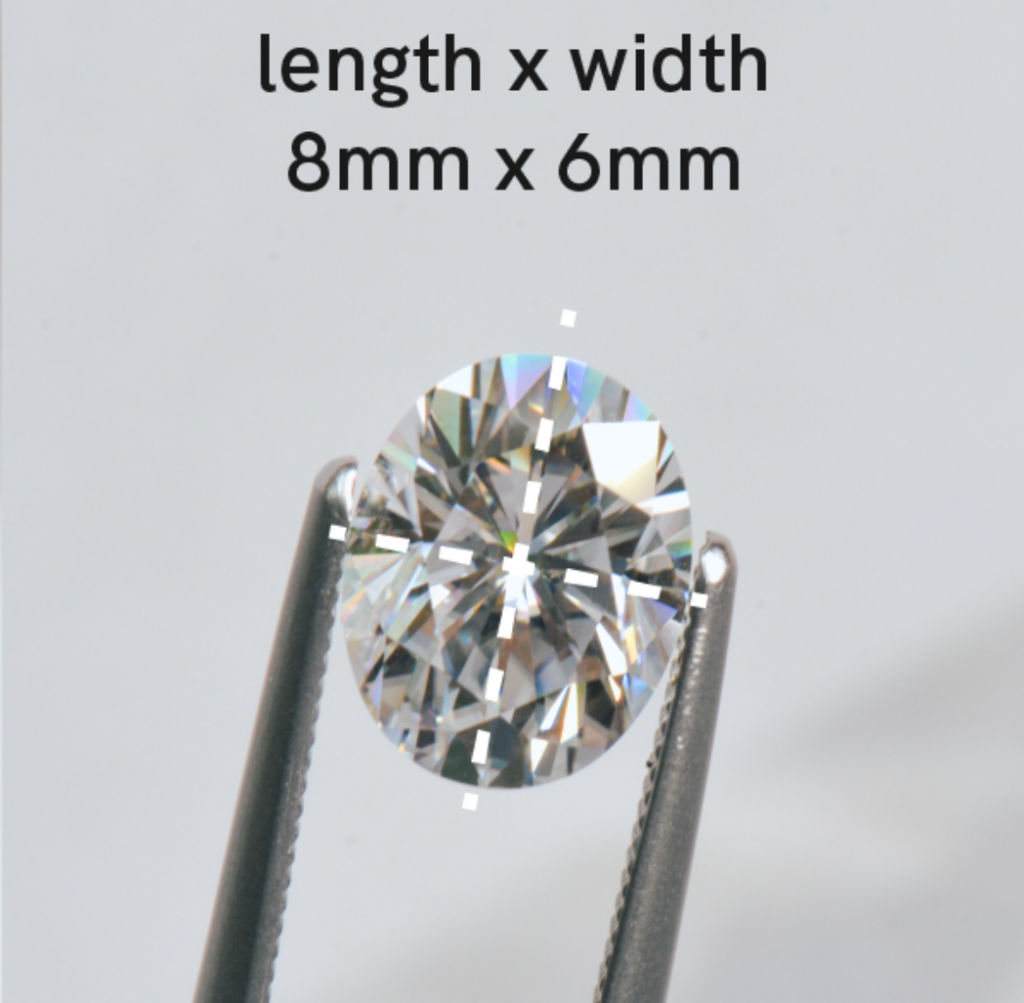 Sometimes you will see them sold by carat but honestly, throw that out. With moissanites you want to look more at the measurements because that’s going to really give you a better picture of how big it is.

While diamonds are graded by color by a letter scale, moissanite are graded a little bit differently. They are graded as being either near colorless or colorless.

You’re going to pay a bigger premium for a colorless stone but that’s why we like to take our clients through that, because if you’re able to see yellow in the stone, we’re definitely going to recommend that you stick in the colorless range.

However, if you’re not able to spot the difference, you can save your money and have a beautiful stone that’s in the near colorless category. 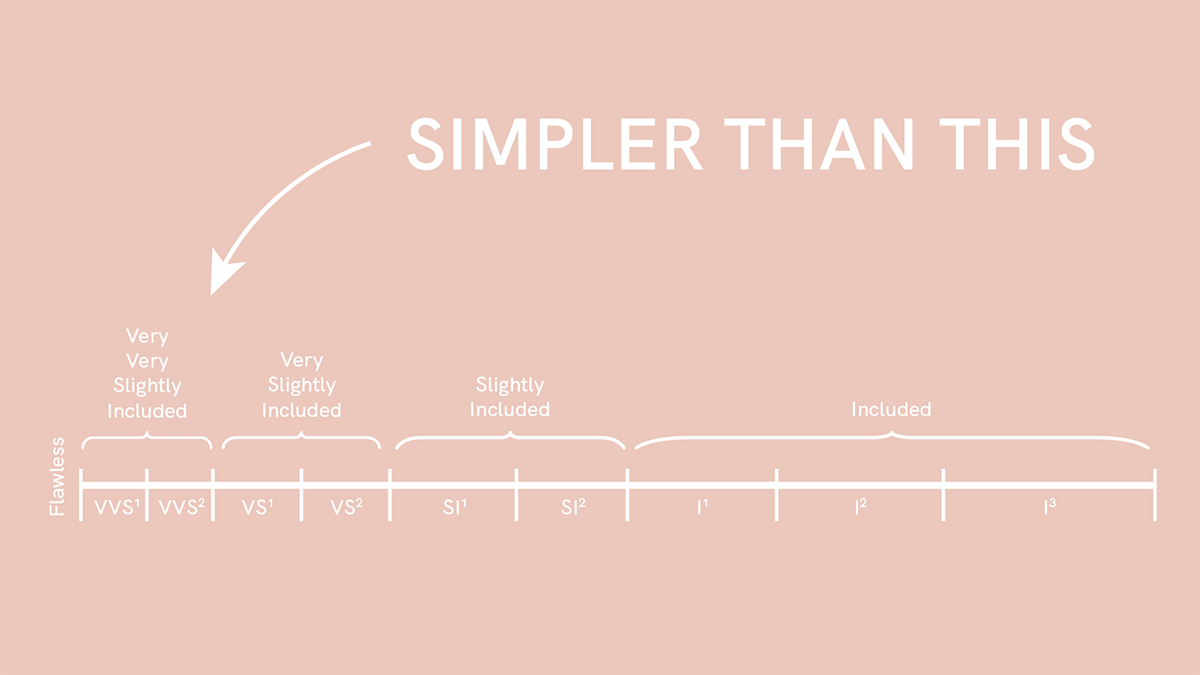 All right. So when it comes to clarity, moissanites are less complicated because they’re all lab grown, the imperfections are invisible. This means that with moissanites you won’t have a clarity grade because you shouldn’t be able to see any imperfections. 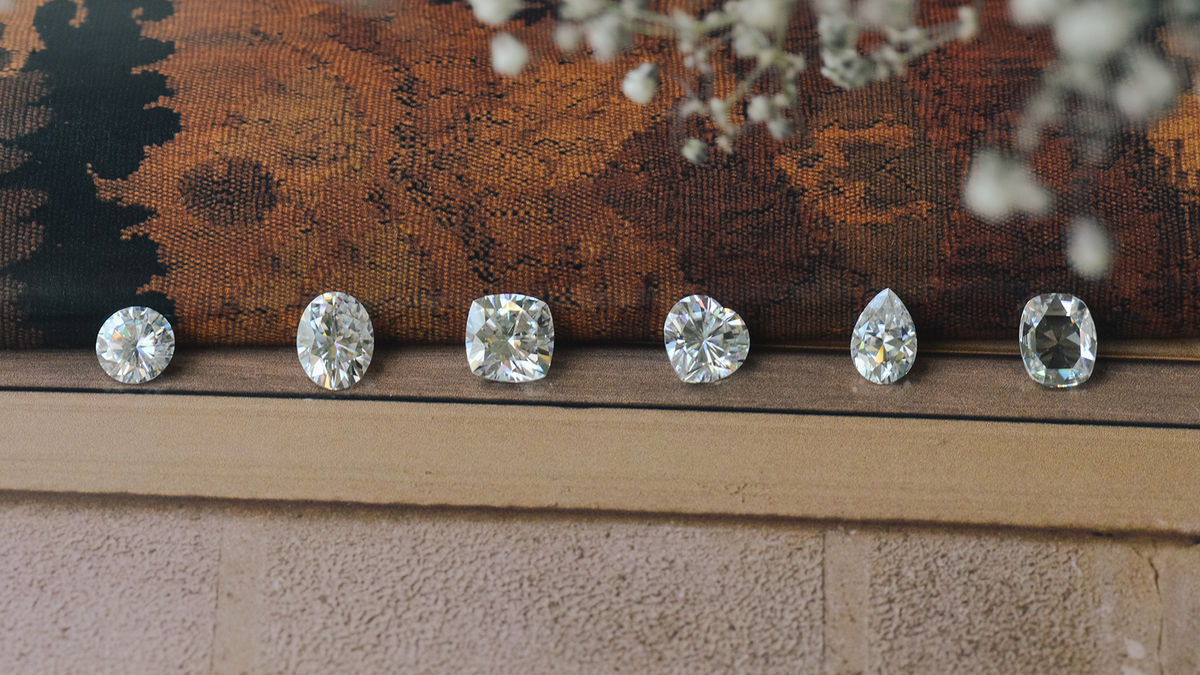 Now let’s talk about shape. You can pretty much get any shape as a moissanite and actually you can even get different proportions. We’ve done ovals where they’re more slender and thin or perhaps you like the more plump variety that almost looks like a round-oval hybrid. Same with cushions – you could get a more square or a more rectangular shape. 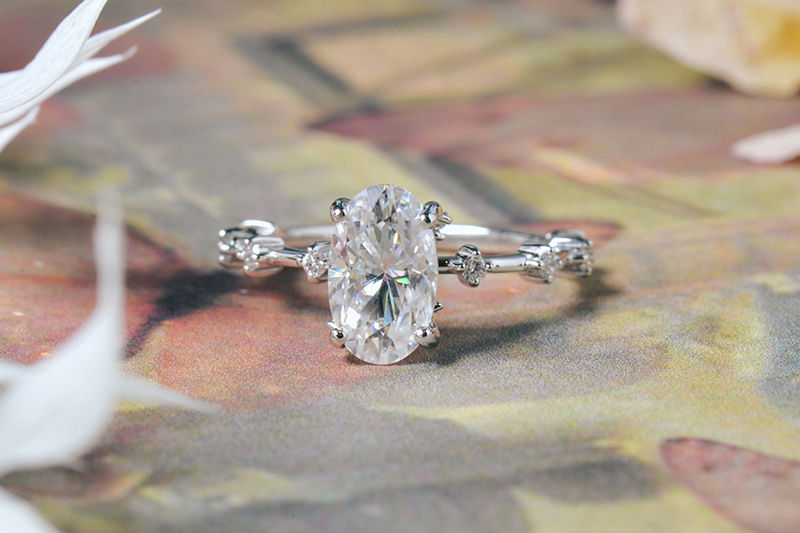 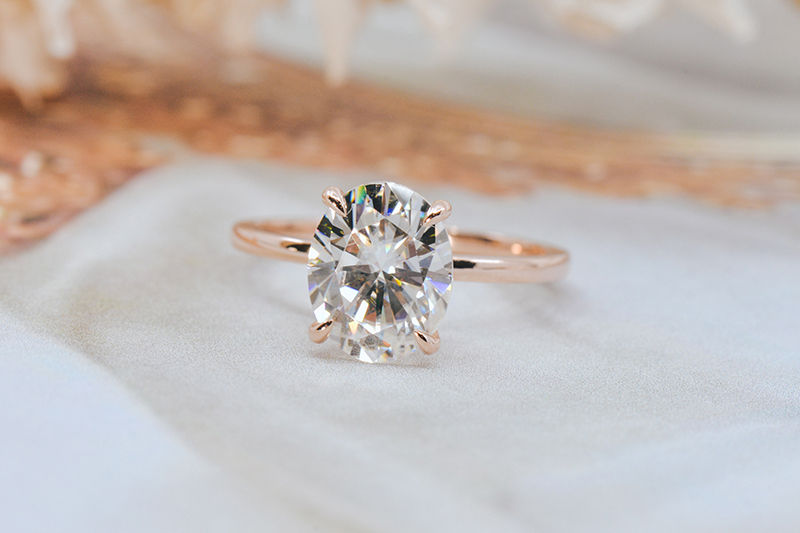 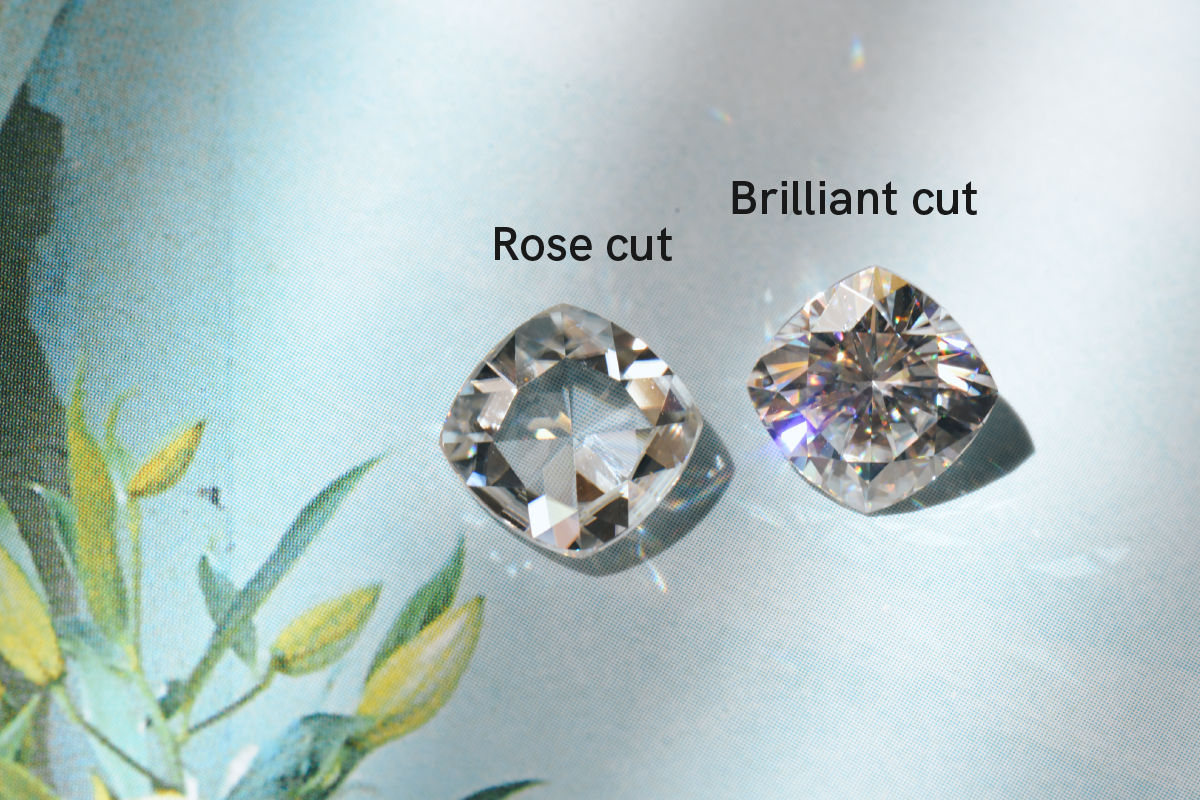 not all moissanites are equal

Moving on to one of the things that’s probably one of the biggest differences – who is growing it and how it’s grown. Originally, there was one company that owned the patent on moissanites, but that patent has now basically expired. And so what that means is now you have a plethora of companies all around the world that grow moissanites but the unfortunate truth is that moissanite is not just a moissanite. There’s a lot of varieties and we’ve certainly seen this.

We’ve seen some where they say it’s near colourless and they market it as such, but we’ve seen the material and it looks very yellow or brown. We’ve also come across other moissanites grown overseas and our setters will tell us that they chipped when they tried to set it because it’s so fragile. So it’s very important that you that don’t assume all moissanites are equal.

However, this is not indication of the actual hardness of moissinate as a stone. The fact that a moissanite could be prone to chipping has to do with the quality of the rock – it’s an inferior rough. In fact, moissanite is about a 9 out of 10 on the Mohs scale of hardness. This means that i’s a very durable stone that’s perfect for everyday wear and tear.

Now let’s get to the hottest question that we get asked – How does the price compare to a diamond?

If a natural diamond costs $10,000, a lab grown diamond is going to cost $5,000 and then that moissanite equivalent is going to cost you about $1500. So one of the benefits of making a custom-made engagement ring is that we can actually work backwards from your budget and we can make sure that we’re ticking off all the things that are meaningful for you. 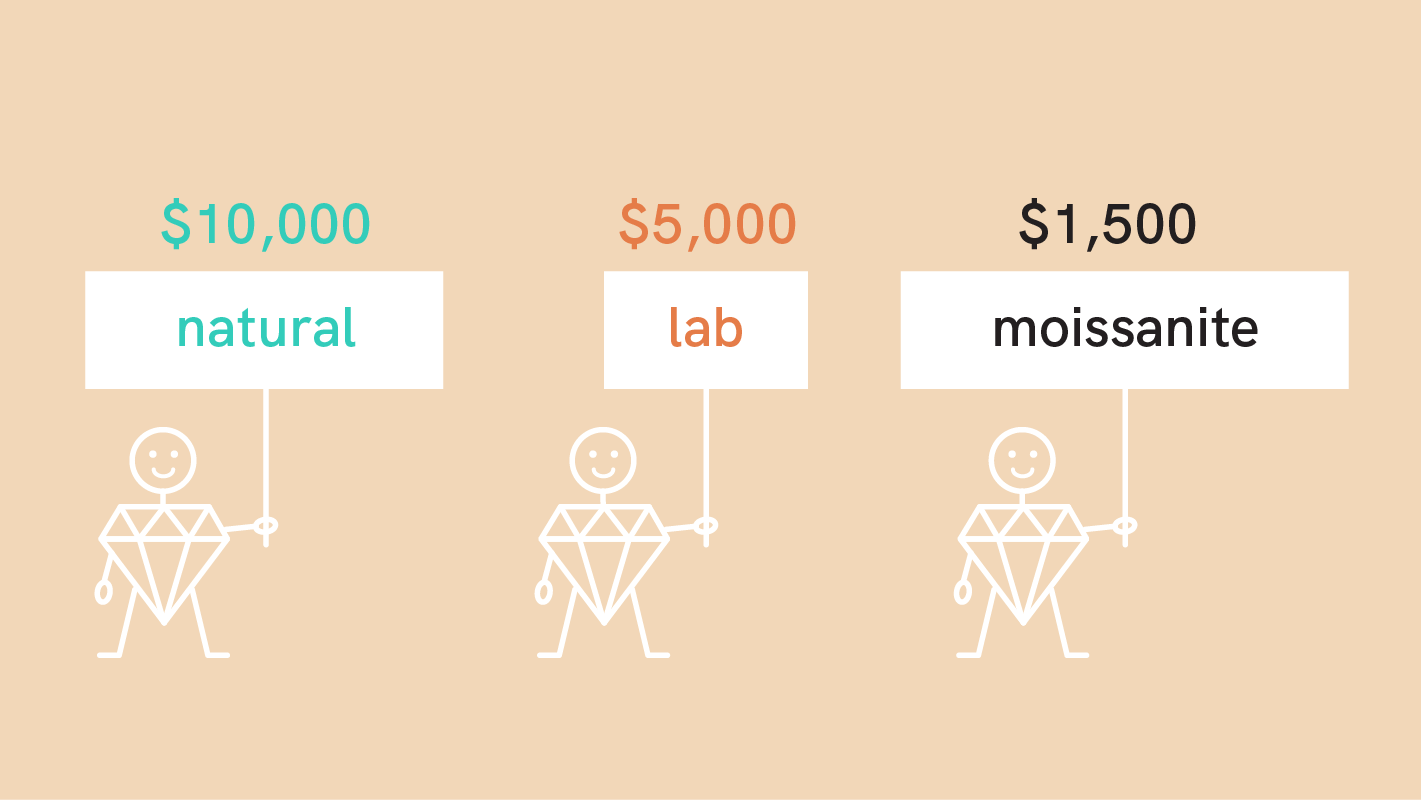 One thing that we want to leave you with is that Moissanite are not created equally but we are experts in moissanite! You can work with us in our Toronto studio or virtually online. We would love to show them to you side by side and figure out which one is right for you. 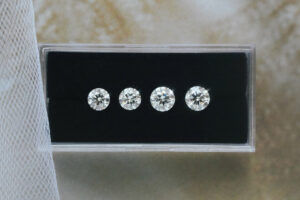 Round Cut Diamonds: Everything You Need to Know 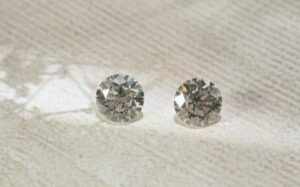 Do Diamond Rings Hold Their Value? 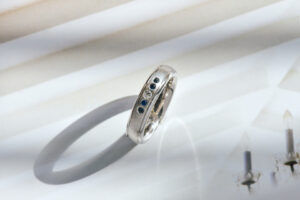 How to Style Men’s Rings 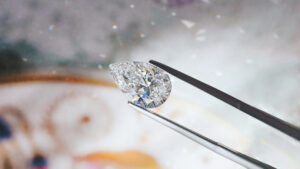 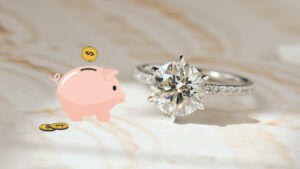 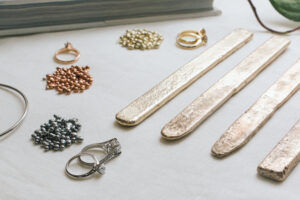 How to Choose Your Engagement Ring Metal

Start designing with us.

Let’s bring your vision to life 💫
Curated and created by choice
Wonderfully and uniquely made
In Christ we trust 🕊
2022 Sheppard Ave E, Toronto 🇨🇦

“One voice may speak you false, but in many ther

When finding the perfect ring for you, you will co

One way to start your creative juices flowing is f

Want to add more sparkle to your dazzler? How abou

They could be similar, but there are 3 things that